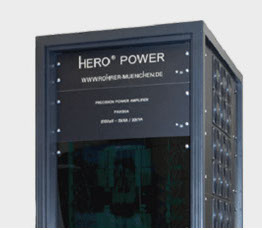 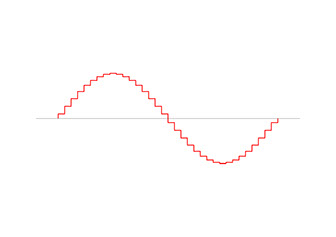 Waveform generator:  It generates exact voltage curves and provides them (e.g. for controllers).

Power amplifier, analog, linear:  These are longitudinally controlled amplifiers. They store the maximum power (output voltage/charge), which is then available within e.g. 1µsec.

If only a part of the stored voltage is called up, very high power losses can occur, which must be dissipated as heat.

Current Amplifier/Transconductance:  This is a power amplifier that provides constant/impressed current (the voltage changes as the load changes).

High Dynamic Switches:  They are used for fast switching (even with high powers).

Switch mode technology (switching regulator):  With this technology, as much energy as is needed is transferred to the output in portions.

4 Quadrant Amplifier:  ... are amplifiers that can operate as both source and sink in 4-quadrants.

Capacitor:  ... is a storage device that can store and release electrical charge (current). In this process, the current precedes the voltage.

Coil (inductor ):  ... is a winding of conductive material (with or without magnetic core).

Resistor:  This is an electronic component that allows current to flow depending on the applied voltage.

DUT (Device Under Test ):  is an object to be tested according to the test specification.

Alternating voltage / alternating current (AC):  This is a changing quantity.

Wave length:  ... is the length of an oscillation (between 2 successive zero-crossings.

clocked:  e.g. in portions according to a predefined clock. A curve such as sin is generated in the form of a staircase and is serrated in steps (see graphic).

Sink:  A sink takes up something.

Zero crossing:  ... is the point of polarity change of a function

Ripple:  ... is the unwanted fluctuation of an amplitude

Line voltage:  This is the voltage provided by the network operator (e.g. EON).

Input voltage:  ... the voltage applied to the device input.

Operating voltage:  ... is the supply needed to operate a device.

Output voltage:  ... the voltage available at the output of the device

Over voltage:  This is usually a voltage spike (such as a lightning strike) that exceeds the rated voltage.

Overvoltage protection:  Protects against excessive voltage (usually by short-circuiting against the reference potential).

Line supply:  Supply of a device from the public network.

Input current:  ... is the current consumed by the device during operation.

Inrush current:  The current surge that occurs when the equipment is switched on (to magnetize the transformer and charge the capacitors). The remedy for this is inrush current limiting.

Output current:  ... the current available at the output of the device.

Over current:  ... is the current that exceeds the allowed current.

Output resistance:  ... characterizes the output when the load changes. There is no uniform value for this.

Interlock:  ... makes the state of the device dependent on others (functions/positions etc.)

Line recovery:  ... is the feeding of electricity (e.g. from solar panels) into the local grid/main.

Ggalvanical isolation from line:  ... With galvanic isolation, electrical potentials are kept separate from each other and thus the circuits are potential-free among each other (here separated from the mains).

V ... Volt (voltage):  electrical voltage measured from the zero line to the peak.

LV124 ... This is a worldwide valid set of rules for vehicles with 12 volt electrical system (automotive).

LV148 ... This set of rules deals with electric vehicles. They are operated on the basis of 48 volts.